Happy Christmas and have a wonderful New Year! We’ve just sent out our last newsletter of the year so make sure you subscribe to that if you want to stay up to date with all the latest tickets and podcast episodes for Mill Race Folk

Marisa, Jack and Davy couldn’t do these shows without such a supportive audience. We really appreciate it and we look forward to seeing you again in the new year.

We’ve got some great folk acts booked for 2019 at Moot Hall in Elstow, Bedfordshire and at a new venue in the heart of Bedford town! (details to be revealed in Spring). We have more podcast episodes planned, more trips aboard the John Bunyan Community Boat and Marisa Jack and Davy will be releasing a new record too. We will announce details of that later in the year.

Cohen took to squeezeboxes in his teens and has since developed into a fine player of both the melodeon and anglo concertina.
His charming solo repertoire consists mainly of traditional songs, tunes and the occasional un-accompanied song. Expect ballads, industrial songs, sea songs and shanties all firmly rooted in the English tradition, with a fair amount of material linked to the West Midlands where Cohen has lived for much of his life.

Support comes from Marisa Straccia. She is one of the organisers of Mill Race Folk and one third of folk trio, Marisa Jack and Davy. She’ll be singing traditional British songs on banjo and guitar. 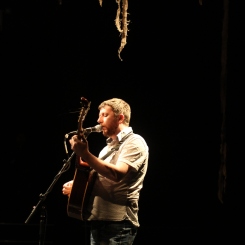 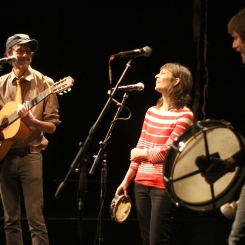 Thanks so much to photographer, Christian Webb for taking photos of the us and of Daoirí Farrell at The Place Theatre on Tuesday. What a night! Daoirí was brilliant and we’re so chuffed for him. He won two awards at the Radio 2 Folk Awards 2017 the following evening. What a star and a really lovely man. Hope to see him perform again soon. x